Posted on September 8, 2019 by NadineMarie (Aligning With Truth)

The only way that trust may be restored and broken relationships may be mended is through a proper apology which constitutes (1) admission and acknowledgment of the mistake including specifying what the error is, and (2) an assurance and commitment to not commit the same mistake.

The absence of one makes the apology a non-apology.

A general statement such as, “I’m sorry” or “I’m sorry for the mistake/s” does not constitute a proper apology.

There should also be no excuses to justify the mistake. No explanations to lessen its gravity.

Otherwise, such takes away the sincerity in the contrition and the intention to make amends.

It truly takes a humble and secure person to extend a proper and genuine apology, be it in a social or business setting; rare are those who possess such a skill or level of maturity and humility.

I get that. I know that.

But it doesn’t mean we must allow such a culture to prevail.

And I was faced with such an opportunity recently.

Do I tolerate the lack of genuineness and inappropriateness in the apology?

Or do I love and respect myself enough to know — and make the other party be aware — that their ‘apology’ is, in fact, a non-apology?

“I’m sorry for the mistakes,” although widely uttered — and accepted by our society as good enough of an apology — is NOT an apology. Not a PROPER one, that is. It is devoid of every ounce of sincerity. It is cold. Heartless. Scripted. Contrived.

“I’m sorry for the mistakes.”

I felt gutted as I read those words in his e-mail.

“There. I said it. Are you satisfied now?”

Those words raced through my head, as I imagined him uttering them while sending his e-mail. I could hear and feel him force upon me his words of [non-]apology.

But I know very well what I deserve.

To settle is no longer part of my make-up. To accept his “apology” sends off the message that I tolerate what I don’t deserve.

And I’m done with tolerating, condoning and settling for less.

For the nth time, I was gifted with the nth opportunity to master my lifelong lessons of self-assertion and boundary-setting.

And peel another layer of healing my mother wound, the emotional root cause of my breast cancer diagnosis last year. [More POSITIVE developments on that in future posts.]

My youngest sister can be such a charmer! “Bolera” [Skilled bluffer]. Perennial liar.

Oh, how effortlessly my sister can charm her way through and weave stories to get herself out of trouble or make you do something against your will! Sweet-talking is ingrained in her DNA. Being the youngest child, she was the family’s favorite [like my only brother]. A spoiled brat.

My mother used to come to my sister’s defense when my two older sisters and I would complain about our youngest sister. “Oh, you’re just jealous of your sister!” was my mother’s organic response.

I was hurt and felt dismissed by my mother’s biases towards my youngest sister.

Later, though, in my young adult life, what I predicted manifested with so much accuracy. I would inject, “I told you so!” when it was my mother’s turn to gripe about my youngest sister. [Ahhhhh….The joy of feeling vindicated, haha!]

Similar energy dynamics are at play in my relationships with key personnel in our residential community.

We have a newly hired community manager in our residential complex whose energy reminds me of my youngest sister.

Unfortunately — and quite alarmingly, I must add — he is the epitome of unprofessionalism! Such appalling actuations, attitude, and management style! The feeling of entitlement!

One of the members of the Board to whom the community manager reports is uncannily so much like my mother! Not only do they have very similar facial features and personalities, but their birthdays are also even just one day apart!

Oh yeah. Yet another opportunity to heal from my mother/family wound. A core wound.

Thankfully, the ever Big Picture and Self-aware person that I am, I’m quick to find the gift instead of be victimized by this recent infuriating incident. I instantaneously take a step back to use it for healing and growth.

I AM Facing My Fear

I am presented with the opportunity of — will I allow my mother [Board member] to condone [again!] the unacceptable behavior of my sister [community manager]? Will I keep mum, afraid of being invalidated?

Oh, there is the very high likelihood of the Board Member [my mother] coming to the defense of the community manager [my sister]. Will I allow that to stop me from speaking up and asserting my rights as a unit owner?

Or will I respond to the situation differently? In a more empowered way this time?

Quite naturally, I’m choosing the latter.

Oh, the hesitation, the fear was there. I’m not denying that. The fear of offending and earning the ire of the Board member [my mother]. Of her justifying the erroneous behaviors and actions of the manager [my sister].

Asserting my rights also meant risking losing the trust of the Board member and negatively affecting the good relations that had been established between the two of us.

But I couldn’t care less. I don’t want to be paralyzed — not anymore — by my mother [the Board member] being angered by my pointing out her favored child’s [the manager] mistakes.

How she would be negatively impacted by my self-assertion and boundary-setting efforts is NOT my responsibility. I no longer want to be burdened by that. Or frightened and paralyzed by it.

And so, I faced my fear.

I faced my fear of earning the ire of the Board member [my mother]. And I prepared myself to face the consequences.

I brought the matter to the attention of those who have the ‘power’ and are duly responsible to take appropriate action and who appreciated my feedback and promised to “deal with the property manager.”

No, the community manager has not offered a formal apology.

I know that the Universe has my back. Always has and always will.

I can hold and am holding my head up high knowing I did the right thing — and came out victorious and transformed!

This, with or without an apology — proper or otherwise.

Pushed Against the Wall

The Board member, on the other hand,  admitted and acknowledged to me her contribution to the issue.

Whoa! I didn’t see that coming!

That was so uncharacteristic and unexpected of her!

I appreciate the command responsibility —  which, as I pointed out to the Board Member, I’m hoping the community manager would emulate. I also reiterated that her acknowledgement of her contribution to the issue does not negate the inconceivable blunders of the community manager — to which she agreed. And I hope the erring manager knows that.

I appreciate and commend her for the humility.

But between you and me, I didn’t feel the genuineness in the acknowledgment. More like, she may have done it only because she was pushed against the wall. Well, that’s how it felt to me. And I sure hope I’m wrong.

Again, genuine or not, it doesn’t matter.

I had been clear that my focus and concern would be on MY — not their — response to the situation. On how I would heal, grow, and transform from it.

And it was such — pardon my French — an effin’ growth opportunity! — for which I’m grateful and proud of having passed with flying colors! 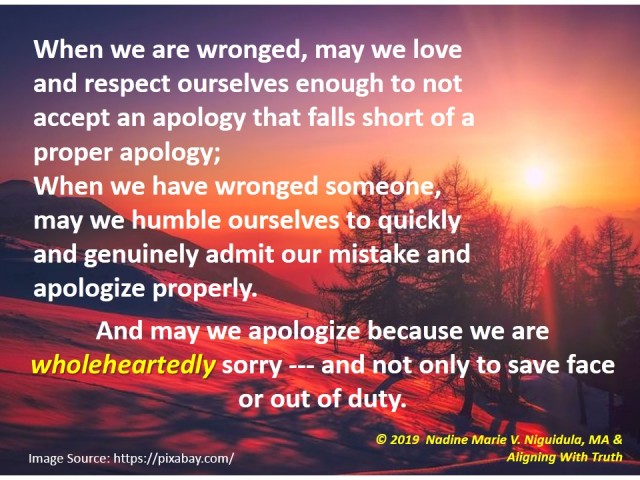 About NadineMarie (Aligning With Truth)

I find much joy & fulfillment in sharing my experiences & insights through writing & blogging. I created the site, ALIGNING WITH TRUTH as a virtual center for healing where I share my thoughts & reflections, as well as the tools & resources that are helping me as I move along the path of awakening & coming home to the Self. As I live in joy & align with Truth, I AM shining my Light which is how I contribute to the planetary & humanity ascension. Brightest & Magical Blessings!!! Om Shanti. Namaste...💗💖💜Nadine Marie💜💖💗
View all posts by NadineMarie (Aligning With Truth) →
This entry was posted in Healing, Health & Wellness, Inspiration, Relationships, Spirituality and tagged healing, inspiration, journey, Life, mother wound, musings, reflections, root chakra, self assertion, setting boundaries, thoughts, throat chakra. Bookmark the permalink.