Posted on September 23, 2015 by Nadine Marie (Aligning With Truth)

That was my mindset. It has been for who knows how long. For most of my adult life undoubtedly — and unknowingly, for the most part.

‘Okay… Poor you helpless creatures. Here, come to Mama, let me fix you.’

It is why I have been a magnet for the damsels in distress. I ‘thrived’ in that energy dynamic. Well, the Victim aspect of me, at least. Such an energy dynamic fed my very low self-esteem, and it continued doing precisely that — keep my esteem low. 😮

It was why I had — unknowingly — chosen to stay at this resort in Sugar Beach — despite all the toxicity in the energies in my midst.

Addictive behaviors and lifestyle particularly the heavy drinking and smoking. Misalignment in our definition of respect and consideration especially as it relates to one’s personal space and privacy. Poor-me/Victimhood/Victim Consciousness. Victim-Persecutor-Rescuer, the Karpmann Drama Triangle. Passiveness-aggressiveness. Manipulative and controlling energies.

Yet, it would be one year in October when I’d have exposed myself to such energies that are clearly not for my best interest. I even considered building my cottage elsewhere in the property despite such toxicity in my midst and misalignment in energies and lifestyles! 😮

It was my unconscious desire to be the white knight saving the damsel in distress!

And it dawned so clearly on me recently how much I have been operating from that paradigm, and why I have been attracting the same pattern of energies!

I’d have wanted to leave and remove myself from this environment since two months ago. I had just arrived then from my two-month arduous travel. I hadn’t gained this much Clarity at the time — not yet. Already, though, I so wanted to get out immediately.

Something prevented me — thankfully.

I had the ascension flu, and it has since been a most intense time of releasing, clearing purging, reflecting, introspecting, integrating and calibrating. (When has it not been, eh?) It allowed me to gain the Clarity that I now have.

I was prevented from leaving for a reason, a most Sacred Intention — to Shift and Transform, Crow’s message since she welcomed me not long after I arrived in July. 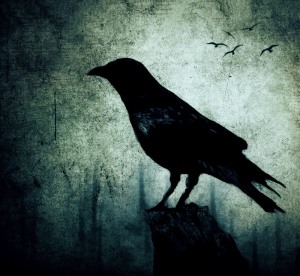 Every Sunday, Crow would magically make her presence known. She’d be perching on the same branch of the same tree fronting my cottage either early morning or noon time. She’d be cawing and calling my attention incessantly.

“The cawing out of the crow should remind us that magic and creation are cawing out to us every day.” ~ Ted Andrews, Animal-Speak: The Spiritual & Magical Powers of Creatures Great & Small

Crow’s other distinct characteristic is her black color. Andrews adds, “Black is the color of creation. It is the womb out of which the new is born.”

One site on animal medicine says,

“When you meet crow, be prepared to let go of your old thinking and embrace a new way of viewing yourself and the world…. Be willing to walk your talk, speak your truth, know your life’s mission, and balance past, present, and future in the now. Shape shift that old reality and become your future self.”

My research on animal medicine led me to the discovery that Crow is also a Native American birth totem of those born between September 23 and October 23.

Something told me that the date September 23 to October 23 would be significant.

Maybe, it would be the time that I’d start packing….

Maybe, it would be the time when I’d begin my journey to my next travel destination.

I just knew something significant, if not magical, would take place around that time.

In early August, I was watching a movie on youtube. For the first time, not coincidentally, I decided not to skip over the ad that was playing. Interestingly, it featured a story of empowerment and creation.

The lady talked about how she coped with the demise of her husband. Upon the suggestion of her therapist, she and her children visited the places that they used to go together as a family when her husband was still alive. It was her way of creating new memories.

And that’s what I have been doing as I released all the misqualified energies from my system — including how I [mis]interpreted my experiences.

I have been creating new memories. I’ve been training myself to view my experiences through a different set of lens — through Divine instead of Victim Consciousness — to arrive at nothing more than Gratitude and Appreciation for all that transpired. As I said in an earlier post after I had just come back, I will only leave when I’m in such a state.

Over the weekend and the days leading to it, I gained even much greater clarity and profound realizations. I sensed the start of the winding down of my stay here at Sugar Beach. I felt a sense of completion. The ending of a cycle.

And the other day, on the morning of September 21, the Fall/Spring Equinox, I received a confirmation of the shift in my energies!

It’s been quite a while since I sat by the beach for my morning tea to kick off my day. I haven’t done it — just because.

The other day, I did.

It was a sight to behold! It lasted for only about five minutes — enough for me to savor the glory and be gifted by such Loving Energy. For a second, I wanted to hurry back to my cottage and get my camera to capture the magical moment.

Thankfully, I stopped myself and simply relished its magic because as soon as I took in and thanked the Blessing, she quickly disappeared! It was as if Rainbow appeared only for me! 😀

I feel more complete now. More balanced. More relaxed. Less agitated and irritated with the energies that I encountered and surrounded me. Energies that I, in fact, magnetized. I’m feeling the shift in my energies, yeah! 🙂

I AM Shapeshifting indeed — just as Crow reminded me.

I find much joy & fulfillment in sharing my experiences & insights through writing & blogging. I created the site, ALIGNING WITH TRUTH as a virtual center for healing where I share my thoughts & reflections, as well as the tools & resources that are helping me as I move along the path of awakening & coming home to the Self. As I live in joy & align with Truth, I AM shining my Light which is how I contribute to the planetary & humanity ascension. Brightest & Magical Blessings!!! Om Shanti. Namaste...💗💖💜Nadine Marie💜💖💗
View all posts by Nadine Marie (Aligning With Truth) →
This entry was posted in Inspiration, Spirituality and tagged animal medicine, creating new, Crow Medicine, Crow Message, healing, inspiration, journey, Life, musings, personal, reflections, rescuer tendency, shapeshifting, spirituality, thoughts. Bookmark the permalink.