Posted on February 16, 2015 by Nadine Marie (Aligning With Truth)

A decade ago, I began my journey of breaking away from my caretaker/rescuer role.

I embarked on a path of self-love. It also meant practicing tough love.

I relinquished the caregiver role that I played for my brother who was recovering from a very serious case of ruptured aneurysm due to drug abuse. His long-standing displaced anger through his display of disrespect and abuse of my kindness while caring for him was the straw that broke the camel’s back.

The predominant theme and energy in my family of origin.

I wasn’t going to put up with it anymore.

I wasn’t going to give my brother any more justification or excuses.

I wasn’t going to be his enabler any longer.

My brother had a temper that he couldn’t manage. He grew up not being able to express his anger appropriately.  His deep-seated rage.

We all put up with it. My mother, my siblings and I — we condoned it. We were threatened by it.

Just as what most families do.

Just as what most families are expected, if not obliged, to do.

It was a bold move on my part to ask finally for what I deserve, what everyone rightfully deserves — respect.

I broke the news to my mother. It was a decision that didn’t sit well with my family, particularly my mother — quite understandably.

I felt so hurt by their apparent lack of support and understanding — especially when they even justified my brother’s destructive behavior as due to the ruptured aneurysm! In part, yes, but not completely.

We sure have been my brother’s enabler for the longest time. It was our comfort zone. Status quo.

Except that it was pack up time for me.

It was also my wake-up call. I wasn’t going to get caught in that Karpman Family Drama Triangle any more!

I felt betrayed by my family’s lack of support and understanding.

I felt abandoned. Dismissed. Excluded. Left out. “Echapwera” in the Filipino language. (Derived from the Spanish language “echar fuera” that means “to throw out.”)

I felt so alone.

Being the middle child, feeling “echapwera” was a recurring theme in my life. Be it subtle, overt or covert — I had long thought that it was the story of my life.

Thanks to my deeply ingrained Catholic beliefs, I had resigned to feeling “echapwera” as something that I couldn’t do anything about. I had blindly believed that to be dismissed was my way to earn brownie points and ‘approval’ from ‘up above.’ I may be rejected here on Earth, but it’s my sure ticket to Heaven! I had thought that I neither had the power nor the choice to change my story.

But I have known better since — thankfully.

It was ten years ago, around this same time — not coincidentally — that I made that pivotal decision of saying ‘no’ to my brother’s disrespectful and abusive behavior.

And I have recently manifested a similar situation and circumstances.

It may appear as though history is repeating itself, but I am, in fact, creating a new story.  A different history is in the making!

In previous posts, I’ve shared the tremendous — f#*!ing — growth opportunities that I’ve been ‘blessed with’ here at the resort where I’m staying in Sugar Beach. It’s where I’ve been experimenting creating my sanctuary for close to four months now.

As is the traditional Filipino style of running a business, the resort staff is composed mostly of the owner’s relatives.

One of them had repeatedly displayed lack of respect towards me. It led to my severely distressed state in December.

The owner and the rest of the resort staff has, also as a ‘family,’ put up with, condoned and enabled the disrespectful behavior of this staff. It’s a long-standing habit of the staff, I’ve been told, not only in this resort but even in her previous employments!

However, there’s been a major shift. 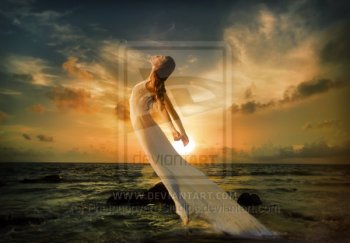 This time around, the resort owner fully and truly respects and supports my decision to keep my distance from the staff — unlike how my mother responded to my decision to distance myself from my brother. The staff has sincerely apologized and genuinely acknowledged her wrongdoing. She has shown remorse and determination to mend her ways — again, unlike my brother.

This time around, the staff and I had a heartfelt conversation — not an ego-driven one. Not one that’s full of justification and blaming. We both owned to our responsibilities. Again, not like the case with my brother.

This time around, I am disconnecting myself from the staff sans anger and unforgiveness. In fact, I’m in a much more peaceful, calm and allowing state. I still don’t want to have anything to do with her, but it isn’t just an emotional decision. It isn’t simply because I’m exasperated and angry — although I most definitely was. I’m leaving our situation not in a state of anger but a state of love — again, not like when I left my situation with my brother when I was full of resentment.

This time around, we handled and resolved the conflict in a much more mature and empowered way. As a result, I’m able to move on and co-exist peacefully and harmoniously with the resort staff and management. I am choosing to live with them — still. Again, not like with my family of origin from whom I have chosen to distance myself completely.

I may have gone through an enormous, intense period of distress in December. I may have been bruised. Embattled.

But I most certainly have come out of it victorious! I conquered. More than conquered!

Over the years, my dedication and commitment to my growth, and especially to love myself — more than and above anyone else — has surely paid off!

I may only now be seeing the fruits of my decade-long conscientious efforts, but I’m ever-grateful and appreciative to be finally reaping the rewards and basking in its glory!

And I look forward to seeing more shifts in other aspects and areas of my life in months and years to come.

My determination and diligence to heal myself, devoting my life and my time to my soul growth and evolution — it certainly has paved the way for a life of joy, yay! 😀

The seeming ‘sacrifices’ and ‘losses’ — the falling out’s and falling away of people and relationships — certainly have been so worth it!

In truth, they needed to happen. They had to. They paved the way for The New.

The old needs to ‘die’ to give ‘birth’ to something new.

Two weeks ago, just before I had that pivotal conversation with the resort staff, Snake visited me and ‘mysteriously’ appeared inside my bathroom! Actually, I have encountered Snake in this resort much more often than usual.

I’m so used to animals and insects showing up from seemingly nowhere — physically or otherwise. And I so welcome and appreciate them. I’m thrilled! They always bring important messages and timely reminders for me.

In Steven Farmer’s Animal Spirit Guides: An Easy-to-Use Handbook for Identifying and Understanding Your Power Animals and Animal Spirit Helpers, he writes that when Snake shows up, it means:

“You’re about to resolve a long-standing issue, one that has required a great deal of your attention, by seeing things in a new light.”

The snake has long been a symbol of alchemy and healing. Death and rebirth.

And what a fitting message and reassuring reminder from Snake —

Something needs to die to give birth to something new!

I find much joy & fulfillment in sharing my experiences & insights through writing & blogging. I created the site, ALIGNING WITH TRUTH as a virtual center for healing where I share my thoughts & reflections, as well as the tools & resources that are helping me as I move along the path of awakening & coming home to the Self. As I live in joy & align with Truth, I AM shining my Light which is how I contribute to the planetary & humanity ascension. Brightest & Magical Blessings!!! Om Shanti. Namaste...💗💖💜Nadine Marie💜💖💗
View all posts by Nadine Marie (Aligning With Truth) →
This entry was posted in Healing, Inspiration, Spirituality and tagged animal medicine, boundaries, breaking a pattern, childhood and family wounding, family, family abuse, inspiration, Life, musings, reflections, spirituality, thoughts, truth. Bookmark the permalink.